A film about Grant Achatz life 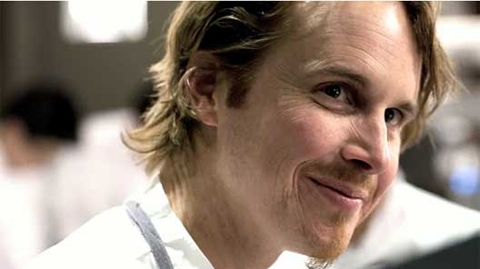 Writer Craig Wright is currently working on a movie about the story of Grant Achatz’s struggle against mouth cancer and how he at the same time tried to keep his world famous restaurant Alinea alive.

According to Swedish newspaper Dagens Nyheter screenwriter Craig Wright is currently working on a script about the optimistic and dramatic story when Grant Achatz got a death sentence by his doctors after being diagnosed with mouth cancer.

For anybody interested in restaurants the story about Grants amazing journey and fight to keep cancer away is not news at all but to turn this into a movie is nothing more than brilliant (and good news), it has every ingredient you can imagine.

It is no surprise that someone was bound to pick up the story about Grants journey, there are however even more things that would be interesting to see done in a movie besides his struggle against cancer. Like being a divorced father, being educated at the CIA, working his way up to being  a sous chef under Thomas Keller at The French Laundry, the opening of Alinea and Next. Most of these subjects would make a pretty good movie on their own, or even a few.

If you are a fan of Grant or any of his restaurants or just want to read up on some good food related reading I can highly recommend Grants autobiography Life on the line which was released in 2012 and is one of the best Chef autobiographies I have ever read. And yes the title of the book was chosen with a bit of thought before.

This is not the first time Grant has been involved in a movie, in 2012 the documentary Spinning Plates was released, not solely about Grant but well worth a look, se a clip below.

One last thing, I think you all agree when I say that the main part should be played by Ethan Hawke, Grants secret brother. Agreed.

One Response to A film about Grant Achatz life