Soused Herring Browned Butter, those two things alone makes this recipe amazing, add some eggs, potatoes and chives and you’ve got yourself a great Nordic appetizer, try it.

In Sweden soused herring is a big deal, served throughout the year but with it´s peak on midsummer, then usually served with freshly picked potatoes, sour cream and onion.

This is another version that also tastes great. If you can’t get a hold of soused herring than you can replace with other Scandinavian style herring, as long as it’s salty and pickled it will work fine, even if the taste is different.

I originally made this recipe during the summer but it’s great all year round. The one thing is that in the summer you can get those small great fresh potatoes. You won’t find any of those during the winter so replace them with any small firm and good tasting potato. 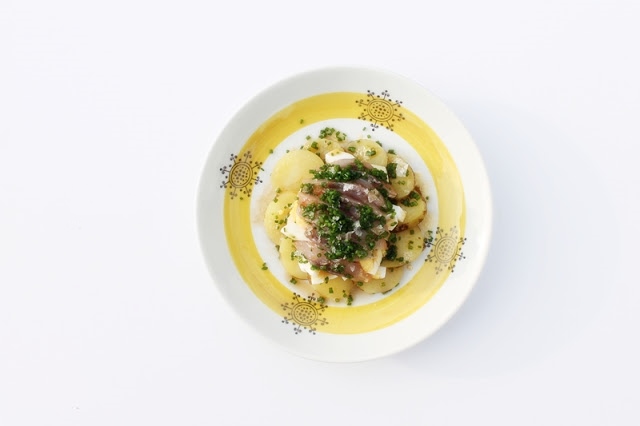 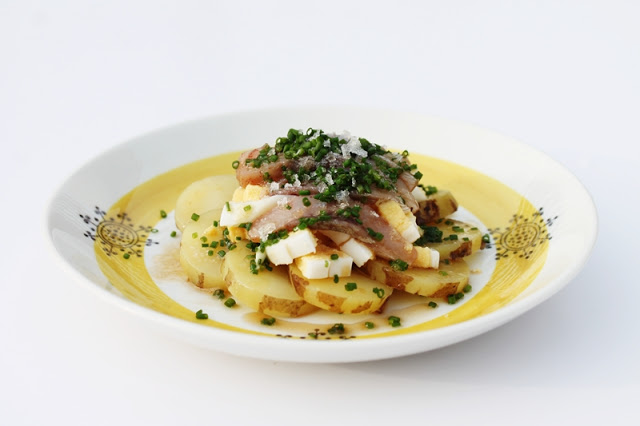 Scrub the potatoes clean and boil in salted water until done. boil the eggs until hard boiled, peel the eggs and chop them. Slice pieces of herring thin, slice the potatoes and arrange potatoes, egg and herring on top of each other. Slice the chives and put on top.

In a pan add butter and let it turn brown in a pan on medium heat. Stir the butter during the whole process to make sure it doesn’t burn on the bottom of the pan. When it starts to turn brown carefully smell it, it should have a nutty aroma to it. This is the reason it’s called Beurre Noisette in French which translates to Hazelnut butter.

If you haven’t used this much before then get to it because it´s has an amazing flavor and can be used to all sorts of good stuff. Pour the butter over the plate and serve immediately. Good luck.