Are blueberries and bilberries the same thing? Let’s take a look on the American Blueberry and the European bilberry, find out what they are, if they are the same, where they grow and most importantly how to eat them.

Let’s start with the most common question and get that out of the way. Are blueberries and bilberries the same thing?

No, they are not. This is they are two separate type of berries but they are very similar, both in the look and somewhat in how they taste. Let’s take a look.

Vaccinium Corymbosum is the Blueberry or North American Blueberry. It is the most common varieties for commercial growth of Blueberries. There are a number of other varieties in the same family. Sometimes it can be found under other names like Blue Huckleberry, Swamp Huckleberry, Tall Huckleberry, High Blueberry and Swamp Blueberry.

Vaccinium Myrtillus is the European Blueberry or Bilberry. The bilberry is normally not cultivated but harvested wild. Just like the American blueberry teh Vaccinium Myrtillus also has a number of varietals. The bilberry also goes under a number of names like Blueberry, European blueberry, bilberry, common bilberry, blue whortleberry and huckleberry.

So you can see why this is confusing. Both blueberries and bilberries have a number of different names similar to each other and sometimes even the same. We’ll dig deeper into the differences between these two delicious berries. Let’s start with how they look.

To not make things even more confusing the word Blueberry will be used for the American Vaccinium Corymbosum for the rest of this article and Bilberry for the European Vaccinium Myrtillus.

Appearance of Blueberries and Bilberries

Blueberry Appearance
The blueberry is a round blue berry about 5-13 mm in diameter. The color is a dark blue and the skin is often slightly matte. The flesh of the blueberry is white to yellow and contain small light brown seeds. The blueberry is easy to transport and rarely break during handling.

Bilberry Appearance
The bilberry is slightly smaller than the blueberry, about 3-10 mm in diameter. The skin color is darker and less matte. The biggest difference is the flesh color. The bilberry has blue flesh which easily stains. Something you easily notice if you ever go pick bilberries, your fingertips is guaranteed to have a purple to blue color along with your tongue if you’ve tasted some while picking. The bilberry is also softer and breaks easy which is one of the reasons you rarely see them sold fresh like blueberries.

Cultivation of Blueberries and Bilberries

Blueberry Cultivation
Blueberries are highly cultivated, mainly in the US but they are grown in most parts of the Northern Hemisphere. There are a number of different types of cultivated blueberries all with their own set of qualities available. The commercial growing began in the Northeastern United States after a collaboration between Frederick Vernon Coville and Elizabeth Coleman White. Frederick worked for the American Agricultural Research Service and Elizabeth was an agricultural specialist. The key discovery to cultivating the blueberry was that they require a sour soil and does not self pollinate. 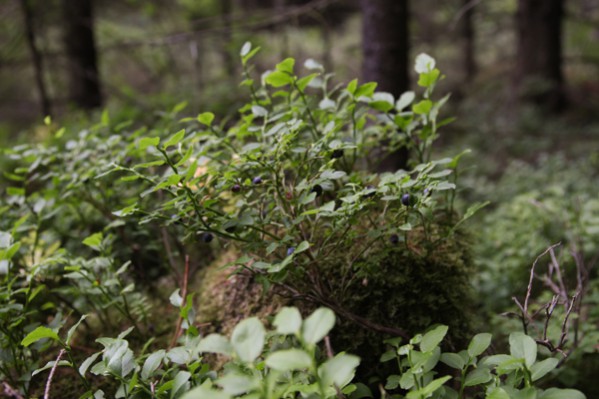 Bilberry Cultivation
Bilberries are rarely cultivated. They grow on low shrubs in nutrient poor soils with high acidity. Although they are not commonly cultivated the berries are picked and sold fresh in markets when in season and sold to fruit companies to be used in processed foods and sold frozen in retail and food service. Bilberries does not grow in bunches like the blueberries do which makes them harder to harvest.

Flavor of Blueberries and Bilberries

Even though both blueberries and bilberries most commonly are used in sweet foods like desserts the flavor content of both berries are quite low.

Blueberry Flavor
Blueberries are juicy and sort of pop or squirt some juice when you chew them. The taste is sweet with slight tart and acidity. The taste is mild when eaten raw and is similar to some fruits like less sweet cherries, apples and grapes. Easiest way is of course to simply pick some up at a store and try them.

Bilberry Flavor
The bilberry has a more intense flavor and are more tart. There are more and smaller seeds in the bilberry which can give it a slight grainy texture. Just as for the blueberries the best way is to buy and taste it for yourself.

Health Benefits of Blueberries and Bilberries

Both blueberries and bilberries are considered healthy or even named one of the few super foods. Most research seem to claim that they both have similar benefits but more of it in the bilberries.

The bilberry have been used for centuries both as a food and for medicinal purposes. The main benefit is said to be the high content of anthocyanosides which is said to help prevent free radicals of damaging cells. The anthocyanosides is an antioxidant which prevents a number of diseases like cancer, macular degeneration and heart disease.

The two things that you often hear bilberries and blueberries are good for is treating diarrhea and problems with vision. How much studies that support this and how much it is actually used for medicinal purposes is a bit unclear so I’m going to leave the health benefit discussion to this.

Both berries contain low amounts of sugar, plenty of vitamins and antioxidants and taste great, so just eat them.

Foraging bilberries is a wonderful (but time consuming) thing and if you’re ever in a place where bilberries grow you should give it a try. The foraging is very popular in Northern Europe in countries like Norway, Sweden, Poland, Finland and Russia.

Most people pick for their own consumption and freeze or use the bilberries for pies, ice cream or leave them in the freezer to use during the winter.

Picking them is easy and they are easy to find if they are in season and it’s a good year for blueberries. The only downsides are that it is very time consuming and your back will be given some hard times. This is because the bilberries grow on low shrubs which makes you either sit down to pick them or bend over. None of which will spare your muscles. You will also return home with blue fingers, lips and tongue because of the picking and tasting in the forest.

In Sweden as much as 17% of the forest floor is said to be covered with blueberry bushes and it is free for everyone to pick thanks to what is called the Allemansrätt. The Allemansrätt translates to the right of public access.

This means that as long as you don’t litter, destroy or misbehave you can visit any forest in Sweden. Pick fruits and mushrooms and even camp for one night for free. You can camp for longer if you move to another place in the forest to. The only restrictions in Sweden are some forest which is natural preserves or national forests. But trust me, there are plenty of forest in Sweden to go around. If you’re ever in Sweden and want to give this a try you can read all about the right of public access here.

Where to buy Blueberries and Bilberries

Blueberries
Since blueberries are highly cultivated it is normally available year round as fresh berries. Cultivation was first started in Northern America but have spread all over the Northern Hemisphere and have even become a popular garden bush so there is no need for long transports. Often you can get them in plastic trays and they have good shelf life for a fresh berry.

Bilberries
Bilberries can be found in deli shops and markets when in season. Sometimes in normal grocery stores as well. Most blueberries picked go to the food industry for processing. The best bet is to get blueberries frozen. They get mushier after freezing but the flavor is normally not affected. Bilberry jam, marmalade and lemonade is also often available.

Culinary Use for Blueberries and Bilberries

Both blueberries and bilberries are delicious to use in a number of things. Personally I prefer to eat blueberries fresh, they are great on granola, with yogurt, fruit salads and to top cakes. Bilberries taste more and works better for jams, in cakes, to top ice cream.

The classics are blueberry pie, milkshake, cupcakes and to use them for blueberry pancakes.

2 thoughts on “Are Blueberries and Bilberries the same thing?”