In this Chef Q&A you get to meet Vic Casanova of Italian restaurants Pistola and Gusto in Los Angeles. With two Italian restaurants in Los Angeles it comes as no surprise that Vic Casanova has a special passion for Italian food. In our Chef Q&A we talk all about that but also how he became a Chef and how spends a day out of the kitchen. Keep reading.

Have you always wanted to work with food?
I’ve always worked with food. I thought I wanted to be a lawyer, but while I was working through college I started to really grow in the kitchen. One day a chef said to me, “I think you have a lot of potential. You should think about cooking professionally.” I will never forget the way I felt—like a million bucks.

I felt like someone had answered this question I had been asking myself. I wasn’t sure that I wanted to be a lawyer, but I had been cooking for some time and I actually have fun doing it. I enjoy it. From that point on I stuck with it. I had been doing it for about seven to eight years before that, so it was natural. 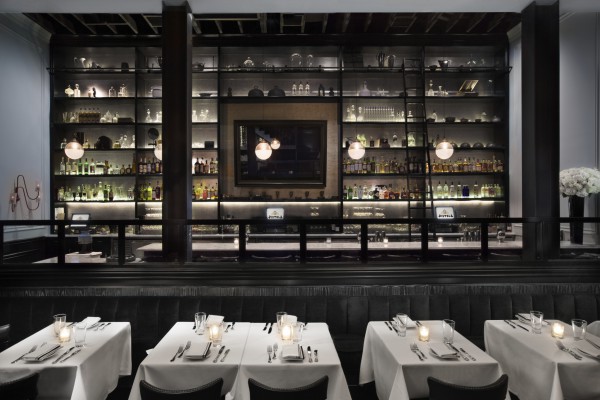 What’s your favourite food memory?
In culinary school we didn’t take regular lunch breaks. We would go into one of the coolers and get bread and cheese. I had never really paid attention to how amazing Parmigiano-Reggiano smelled, how it tasted. I remember it like it was yesterday, the first time at school that we were getting snacks together. Naturally I went into the cooler to pull out a big block of Parmigiano-Reggiano and I broke it off—I didn’t cut it—I broke it. There was this aroma that came from the cheese. To this day if I had to name my favorite ingredient it would probably be Parmigiano-Reggiano.

Not too many people really know what it tastes like or smells like. People get other varieties. My current favorite chore at any of the restaurants is when a big wheel comes in. I want to break it down. That moment when you cut into that wheel and it releases its greatness, I think that’s so special and so delicious. Just a little bit of crusty bread and some that cheese and I am happy.

Do you have any favorite ingredients at the moment?
I’ve been really lost in this mix of garlic, chili and rosemary. I can do crazy things with it, from chopping, grinding and rubbing cuts of meat to lifting a vegetable dish. It’s a very traditional flavor profile that comes from Emilia Romagna. It seems that as I get older I can’t get enough of Emilia Romagna, which is where Parmigiano-Reggiano, aceto balsamico and prosciutto di Parma come from. 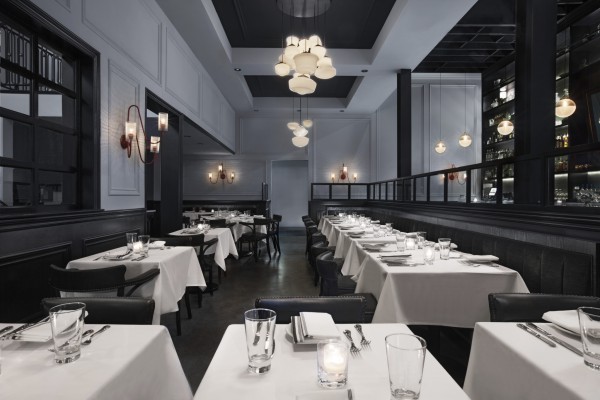 How do you work with ingredients with such high quality in California, do you still source much from Italy or do you try to stay local?
I do everything I can to stay as local as possible. There are a few things that simply defy that. I don’t think that we have an equivalent to some items, such as Parmigiano-Reggiano or prosciutto di Parma. We don’t have anything comparable here, so I get it elsewhere. Other than that, the stuff on our shelf is pretty local.

How would you describe your style of cooking?
Free-range Italian

Being so into Italian food, do you have a favorite Italian region or do you find inspiration from all over the country?
I really enjoy the ingredient from Emilia Romagna, but if there’s one region that has my heart it’s Tuscany. They have an appreciation for simplicity. There’s nothing complicated. They take awesome cuts of meat and they roast them or grill them in a very simple way. It’s not about the five other ingredients we’re putting into it, it’s about how we can make a dish be what it really is. It’s just like how I want my children to be; I don’t want to influence them or alter whatever they have, I want to figure out how to help them be whatever they are.

When it comes to cooking, everyone has a different approach. Whenever I’ve been most successful in cooking, I’ve been taking a step back, taking an extra ingredient off of the plate. I try to focus on the core of what is, rather than adding something that makes it lack substance. I have flavor combinations that are brilliant and I know that, but I rotate them all the time. For example, right now the octopus is being served on one of my classic sets: beluga lentils, caramelized shallots and salsa Verde. I’ve maintained that set over the years, it’s one of my classic dishes, and it’s deeply rooted in tradition.

There are a few regions where you see stuff like that specifically, such as Umbria. It’s not about the chicken or fish, so sometimes I’ll put chicken or fish. Or octopus.

Some of the best Italian food I’ve eaten has been outside Italy, not that there aren’t great places there but I think that they are a bit too held back by traditions sometimes, do you agree?
No, I don’t agree. I don’t think we would have the kinds of feelings or the same food experience if they didn’t have such devotion to the traditions. Are you really going to go anywhere other than Campagna to experience what a real caprese is like? No. The cheese, the olive oil, the tomatoes are all very specific to that area—nothing stands up to that.

When you start to go around Italy and look for these key things, it’s impossible to duplicate them later. The environment is everything. If you were to go to Tuscany to taste the Chianina beef, it would taste very specific and come from a very unique cow with very unique characteristics. And beyond that, how could you duplicate the aroma of the air in Tuscany? How could you duplicate the experience of sitting and enjoying a glass of chianti, smelling rosemary and thyme and lemons and my food cooking on the grill?

If you go to Rome and you have carbonara, who knows if you’re eating the best carbonara there is? But you’re in Rome, eating carbonara. And I inherently believe that there’s no way to replicate that feeling, that same emotion that people talk about and thrives as tradition that people carry on for years and years and years… We can only give you a piece of what it could be like and do our best to highlight all the good things about it, and do our best to create an environment that is somewhat similar.

That’s not to say that a California tomato could never be as good as a tomato from Campagna. That’s not true. But people say that they’ve never tasted a tomato like they have in Italy. Tomatoes from Campania are inherently different because of the volcanic soil that they’re grown in, which gives them a certain kind of sweetness. And the tomato from California will never have that. We can grow good tomatoes under good conditions, but the terrain means so much.

Working as a Chef at your level takes loads of energy, what do you do to relax and recharge on a day off?
We do a family day. Every Sunday and Monday is family day. I don’t wake up terribly early, I mosey around and check out the restaurants then change the car seats into my car and we go to Sugar Fish. They all know us at the one on La Brea because we go there religiously. It’s just the most amazing and natural thing.

The kids play with their sushi rice and their nori. And we’re all plucking beans out and my daughter plucks one out and hits me in the eye. I found a specific type of wine that I like to bring there, it’s a Sancerre. Sancerre, Sugar Fish, La Brea, about noon, every Sunday, that’s how I do it. And then we go home and for dinner we have barbecue on the backyard grill, no matter how cold or hot it is. It’s a ritual. The ritual of getting the coal and cleaning up, and it’s not always the easiest thing. And my daughter likes to run around “helping me,” and I set up music on the Bose speaker. It’s good. 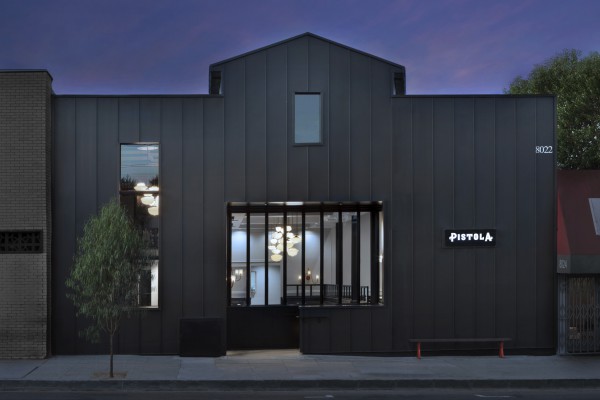 Do you have a guilty pleasure in food, and if so what is it?
Pork. To be more specific, we do this dish at Gusto—it’s a pig’s head Milanese. We did it with stock because I like pig stock in the pasta. It’s really really good. We get pigs’ heads and split them, put them in a pot and simmer them all day. It just smells really good, before you put in herbs or anything, it just has a savory smell.

Then one day, because I’m so in love with that aroma, I decided to do something different instead of throwing the pigs’ heads out. I put the head on a rack to cool, and then I peeled the skin back. I found the most amazing pig meat that I’ve ever tasted. So I thought that I would gather all the little bits of meat and press them together into a mold, bread it and fry it, then squeeze a little lemon with a little bit of salt on top. You can’t beat that.

Thank you for your time Vic and good luck in the future. 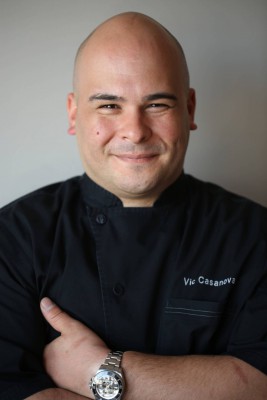 Vic Casanova grew up in a New York Italian family and spent most of his childhood learning from his mother about food. After culinary school and working at a number of successful restaurants Vic Casanova went out on his own and opened Gusto in 2011. After turning Gusto into a success it was time to open a second restaurant and in 2014 the Italian steakhouse Pistola. Today Vic runs both these Italian Los Angeles restaurants and shows no signs of slowing down.

Gusto was opened by Vic Casanova in 2011 and was immediately met with critical acclaim including being named Esquire Magazines Best New Restaurant in 2012. With respect for the Italian tradition but with a LA twist Gusto offers what can be called Free-Rage Italian Cuisine. Gusto seats up to 38 diners and is located on West 3rd St between Orlando & La Cienega in Los Angeles. If you want to keep up with Gusto you should check them out at Facebook and Twitter.

Vic Casanova’s second restaurant Pistola was opened in 2014 and is an homage to the Italian New York City restaurants in the 1950’s. An nostalgic tribute to Italian comfort food but not without evolving. Pistola offers Italian classics like Linguine Vongole, Lobster Fra Diavolo and being an Italian steakhouse there are of course a wide range of classic Italian steaks on the menu. Pistola is located on 8022 W 3rd St in Los Angeles. To see what is going on at Pistola make sure to follow them at Facebook, Instagram and Twitter.