What is Falukorv? In short a sausage that Swedes eat like there was no tomorrow, but let’s dig a little bit deeper and learn all about it. It’s one of the most common foods in Sweden so you should learn a little about it.

Falukorv or Falu Sausage is simply a sausage. But it’s not something you’ll find very often in restaurants. Falukorv is usually cheap and most of it gets eaten at home, it’s really too cheap to be a restaurant meal. But since it is one of the most popular foods in Sweden I thought it would be a good idea to go through everything you need to know about this popular sausage.

What is Falukorv or Falu Sausage?

Falukorv is a sausage. It’s a big sausage that you normally slice and eat pan fried or cooked in the oven. The main ingredients is beef and pork but horse meat is also allowed but rarely used. Besides the meat there is also potato starch, onion and seasoning.

The diameter of the falukorv has to over 45 mm so you won’t find any hot dog style falukorv sausages. The sausage is cooked in a red plastic casing and shaped into a round ring but there is also shorter versions and straight falu sausages to buy. The round shape of the falukorv comes from when the sausage was made in a natural casing.

The sausage is cooked when you buy it so it can be eaten raw, something most people who grew up in Sweden have tried. Stealing a slice or two from you mothers cutting board is not uncommon if you have been raised in Sweden.

But not any sausage can be called Falukorv, there are rules. 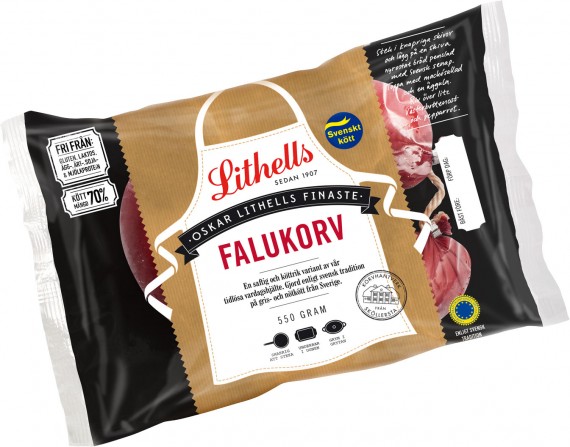 Anyone can make a sausage and call it a Falu sausage or Falukorv but there are plenty of rules that needs to be followed. That is because the falukorv is protected by GTS. GTS is a quality protective system organized by the European Union. GTS stands for Guaranteed Traditional Speciality. In short a product needs to be produced in a traditional way to be able to get a GTS status.

For falukorv this means the following.

The allowed ingredients are

Besides this you are allowed to use the following additives

The meat is chopped and filled in plastic casings that need to be bigger than 45 mm in diameter. The meat content must be at least 45% in the finished product. No more than 23% of fat.

Once the casings are filled they are smoked and cooked and then chilled. Then it gets packaged and is sold chilled in stores. You can also freeze falu sausage but for some reason all falu sausage is sold fresh in Sweden.

The history of falukorv dates back to the 16th and 17th century and the region of Dalarna in central Sweden. In the town Falun in Dalarna there was a big copper mining industry. At the mines ox hide was used to make ropes that was used in the mines.

That meant there was access to meat which was often salted and smoked. In the mines there was many Germans working so the theory is that the Germans used their version of the Lyoner sausage as an inspiration and created the falu sausage. So in a way the most Swedish sausage is really a German invention.

The name falukorv comes from the town Falun which is shortened and paired with the Swedish name for sausage which is korv.

In the 1870’s butcher Anders Olsson created what we think of as falukorv today when he started making the sausage at his butcher shop in Falun. Since then the sausage has become the most popular in Sweden and all major meat companies make and market a number of different varieties of falu sausage. 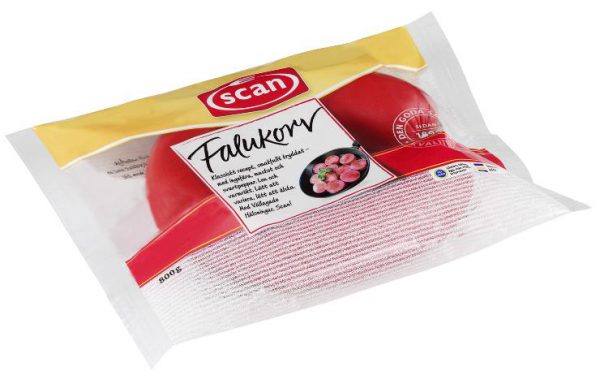 How Do Swedes Feel About Falukorv?

We love it and we hate it. As mentioned it is the most popular type of sausage in Sweden but at the same time it is looked down on. That’s because whenever something gets really popular people do their best to lower the prices to sell more.

This has resulted in a market with plenty of low quality sausages. In recent years more consumers have started caring more about the quality so now you can find both great and bad falu sausages in most stores.

Another reason why falukorv is a bit looked down on is because it has always been a working class food. It was created by miners in a working class town and it has never been trendy or considered fancy in any way. You never hear anyone bragging about eating falukorv.

At the same time it is delicious, cheap and easy to cook so it has always been popular. Since most of us have grown up with it there is also a bit of nostalgia to the falukorv. So my guess is that it won’t go anywhere in the future.

Since it is cheap and easy to cook you very rarely see it in any restaurants either. If you want to eat falukorv in Sweden you need to get it in a store and cook it yourself or make sure to get invited to a Swede. Make sure you get invited on a weeknight because no Swede will eat falukorv on the weekend. Maybe for lunch if they are busy but never on the evening.

A Tuesday night in October a family have to get the kids to the soccer practice, work late and pick up the car from the service is a good bet to when they will be eating falukorv.

You can eat falukorv any way you like of course but these are the most common ways.

Pan fried with creamed macaroni – The falukorv is sliced and pan fried, it is served with macaroni which is creamed in a bechamel sauce and usually served with ketchup. It can also be served with other creamed things like carrots, cabbage or other types of vegetables.

Baked in oven with mashed potatoes – The falukorv is cut in slices like a hasselback potato  so it still holds together. Between the slices you can add cheese, mustard and ketchup. The sausage is then baked in the oven and served with mashed potatoes.

Korv Stroganoff – Here the falukorv replaces the meat in a Stroganoff. The sausage is cut into strips and pan fried with sliced onions. Then tomato paste or canned tomatoes is added together with milk and or cream. The Korv Stroganoff is then served with boiled rice.

There are many other ways to eat falukorv but these three are among the top ways, the recipes are not exact since everyone has their own twists and tricks to perfect their recipes.

A great tip is to bring falukorv when you’re out camping, a slice grilled over an open fire is a great snack. It also works great for brunch or with some fried eggs. 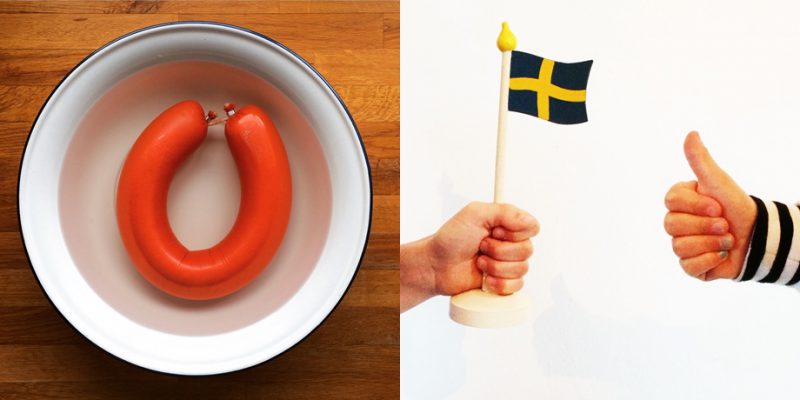 Osama Bin Laden and the Falukorv

In the book Dining with Leaders, Rebels, Heroes and Outlaws by Fiona Ross there is a story about the time when terrorist Osama Bin Laden had a run in with the Swedish falukorv. Osama Bin Laden visited the copper mines of Falun with his family in 1971. You can google Bin Laden in Falun to see a family photo taken during the trip.

Osama was not really a foodie and mostly enjoyed mild flavored food. But on this trip he took a chance and tried Fried falukorv with potatoes and mustard. The mustard proved to be too strong for Osama who fell violently ill and ended up vomiting to get rid of the mustard.

Perhaps he should have gone with the creamed macaroni version instead?