127 Years of Hard work, in a cocktail? Not if master blender for OP Anderson Akvavit has a say in the matter. Watch the great new ad for this great Swedish akvavit.

Apparently, people have started pouring OP Anderson into cocktails. The most popular akvavit in Sweden, all shaken up with ice and all sorts of other flavors much to the dislike of its Master Blender Bertil Karlson. He won’t stand for it.

This is the new ad for Swedish akvavit brand OP Anderson. In the ad, we get to follow its Master Blender Bertil Karlson and be told all about the 127-year-old tradition of OP Anderson. How the herbs and seeds are always perfect, how Bertil and his fellow colleagues always make sure the quality and flavor are on top. But there is something gnawing at Bertil.

It’s not his health, it’s not his love life or social life. It’s something else, something that’s just wrong. By the end of the ad, we find out just what. People have started to make cocktails using akvavit, and Bertil Karlson can’t stand it.

He hates it so much he actually hops on his bike in nothing but is pajamas and bikes his way to some sort of nearby hipster bar and shows the bartender the finger. Well done Bertil.

This is of course just a brilliant ad by OP Anderson. Since younger people aren’t big on akvavit and the way you drink it (like a shot, if you might be wondering) OP Anderson and practically any company in the world would love to see their brand as the new cool cocktail ingredient.

Is it good to use akvavit in cocktails?

First, in short, akvavit is flavored vodka, that alone should tell you enough. Sure you can. You do need to keep in mind that the herbs and flavors that go into most akvavits are quite powerful so use them carefully. But earthy flavors that pair with common akvavit flavors like caraway, elderberries, fennel and stuff like that work great. To give you an example I even have a recipe where akvavit is used. Not OP Anderson but still. It works.

If you’re not familiar with akvavit I have a big post with everything you need to know about it right here. Lastly, let’s find out a brief history of OP Anderson. 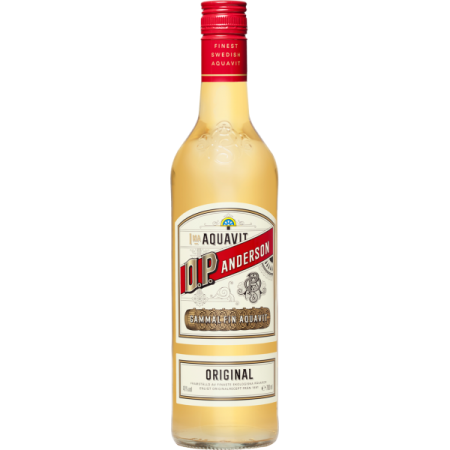 What is OP Anderson

OP Anderson is a Swedish brand of akvavit. It was first launched during the Gothenburg Exhibition Fair in 1891. By then it wasn’t called what it is today, it was simply called “Gammal Fin 1 Aquavit” which roughly translates to “Old Fine Aquavit No 1”.

The reason the name was later changed to OP Anderson is because that was the manufacturing company was called. OP Anderson & Son i Göteborg, or in English OP Anderson and Son in Gothenburg.

OP in the name stands for Olof Peter Anderson, he was born in 1796 and started working with chemicals and construction material which eventually got shifted more in direction of spirits. Olof Peter himself passed before his akvavit was even launched, his son named it after his late father.

The akvavit is the oldest and most sold in Sweden. It is matured in oak for eight months and flavored with fennel, anise and caraway. If you’re ever in Sweden I highly recommend having a snaps or two of OP.

As a last little tip I want to point out that akvavit bottles are often beautifully designed, just check out this collection.