Swedish Kaviar: What it is, the history and how to eat it

Learn all you ever need to know about Swedish Kaviar. Not the expensive black fish eggs you’ll get at fancy French restaurants, no we’re talking about the creamy Kaviar that comes out of a tube and goes great with eggs and is loved by Swedes worldwide. Read on how it all got started, the history, how to eat it and where to get it. It’s Kaviar time!

What is Swedish Kaviar?

Swedish kaviar is a fish egg spread. Its main ingredient is cod roe that is lightly smoked and seasoned with sugar and salt. Then it is mixed into a paste with potato starch, tomato paste and vegetable oil. Most of the brands are neutral in taste but you can also get varieties that are seasoned with other spices and herbs. There are kaviar with dill and also varieties where the kaviar is combined with cream cheese.

How is Kaviar sold?

Almost all kaviar in Sweden is sold in tubes, what basically looks like a tube of toothpaste. There are some other types of packaging like jars and cans but these are mainly used for the foodservice industry. Packaging food in tubes is quite common in Sweden and besides kaviar it is common to sell other sandwich spreads in tubes. You read an article about food in tubes and what types of food that are sold in that way here.

How does Kaviar taste?

Well it’s a Swedish taste. Its a creamy spread with small fish eggs. The salt level is quite high but it is sweet at the same time. So the taste is like a creamy paste with slightly salty fishy taste. Some say it in some ways can be compared to Marmite, only more fishy and a more creamy texture.

How to eat Swedish Kaviar?

The two most common way to eat Swedish kaviar is either with boiled eggs or on sandwiches. When serving with eggs you simple put a little bit of kaviar for each spoon of egg you eat. For many Swedes this is a must when it comes to eating boiled eggs. For sandwiches you can combine it with other foods like cheese but again the most common sandwich is the egg sandwich. Boiled cold sliced eggs with kaviar on top. So you’re really eating eggs with eggs. 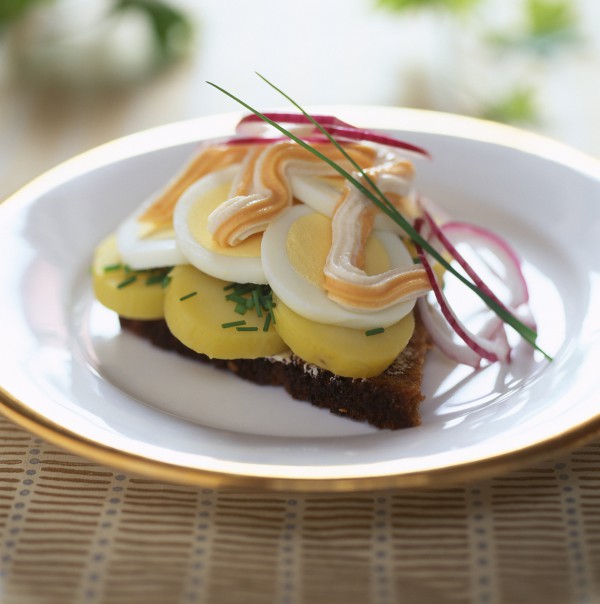 A Kalles Kaviar Sandwich, in this photo the Kaviar with Cream Cheese is on top of the eggs. (Photo courtesy of Orkla Foods).

In restaurants and sometimes at home kaviar is also used for main dishes as well. A cold sauce with mayonnaise mixed with caviar and herbs is like a Swedish tartar sauce that goes great with fish. But you can also use it in warm creamy sauces served with fish. 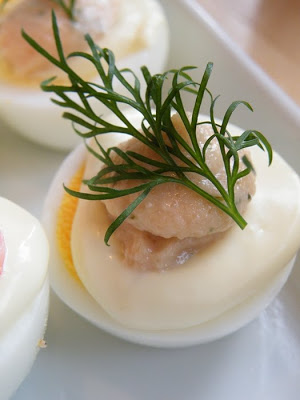 Kalles was the first brand to start selling kaviar in a tube in Sweden and is without a doubt a Swedish icon. The history of Kalles kaviar is also the history of Swedish kaviar.

This is a brief history about Swedish kaviar and Kalles Kaviar, most of this history comes from the history of Kalles Kaviar.

1850 – Salted cod roe become a popular thing to eat in Sweden. This is what then will transform into Swedish kaviar.

1910 – By accident oil is mixed into the cod roe and the new type of kaviar is born.

1954 – A local producer and seller of kaviar sells his recipe to Abba who decides to sell the kaviar in tubes. The kaviar sells more than expected, especially among children and young people. At this time the tube is without any design. Abbas ad agency suggests that one way of boosting sales would be to put a child with a common name on the tube. They also decide to go with yellow and blue as the colors, representing the colors of the Swedish flag.

The CEO of Kalles son Carl Almen is drawn from a photo and put on the tube. The name Kalles is chosen because it is a popular name for children at the time.

1955 – The Kalles Kaviar is an instant hit, more than one million tubes is sold in the first year. At the time there is little more than seven million people living in Sweden.

Today – Since 1955 not much have happened. More variations of kaviar have been marketed like with dill, lightly smoked, extra smoked and kaviar combined with cream cheese have been introduced. But kaviar in 1955 is more or less the same product that you can find in almost any Swedish refrigerator today as you could in 1955.

Where to find Swedish Kaviar outside Sweden

The biggest seller of Swedish kaviar outside Sweden is IKEA and most of the buyers are Swedes living in other parts of the world. There are some local speciality shops that are focused on Scandinavian foods that might be selling kaviar but the best bet is still IKEA.

Or befriending a Swede since kaviar is brought to Swedes by their relatives and friends when visiting. So if you find a Swede in any part of the world there is a big chance he or she has a tube of kaviar hidden in their fridge.

My very own tube of Kalles Kaviar, found in my fridge. This one is flavoured with dill.

Kalles Kaviar are in the middle of an ad campaign where they are focusing on what a Swedish taste kaviar is. In this series of commercials they are serving Kalles Kaviar sandwiches at random places in the world. Anyone who gets to taste the kaviar are not impressed and the commercials are ended with the slogan “A very Swedish flavor”. This campaign have also been getting some international recognition in The New York Times.

The campaign is made by agency Forsman & Bodenfors, a Swedish agency founded in 1986 and considered one of the best in the world. Forsman & Bodenfors was the agency behind the “Epic Split” campaign for Volvo Trucks with Jean-Claude van Damme in 2013.

Below you can see all the Kalles Kaviar commercials that have been made so far. In the most recent one where Kalles is served in New York has a twist to it because everyone who is coming up to try the kaviar turns out to be Swedish and love the kaviar. This commercial is airing now in Sweden as part of a campaign where you can win a VIP trip to New York with Kalles Kaviar.

This is the latest commercial set in New York. The twist is that all the people who are coming up to taste the Kalles Kaviar is Swedish. The first line from the guy is “I love Kalles”, the rest keep eating and appreciating the kaviar in similar ways.

Here Kalles is trying its luck at Venice Beach in Los Angeles, not going great.

And Kalles Kaviar in Switzerland.

And in Tokyo, what I like about this one is when the tasters really dislike the kaviar but are to polite to say so.

2 Responses to Swedish Kaviar: What it is, the history and how to eat it

» Ingredients » Swedish Kaviar: What it is, the...