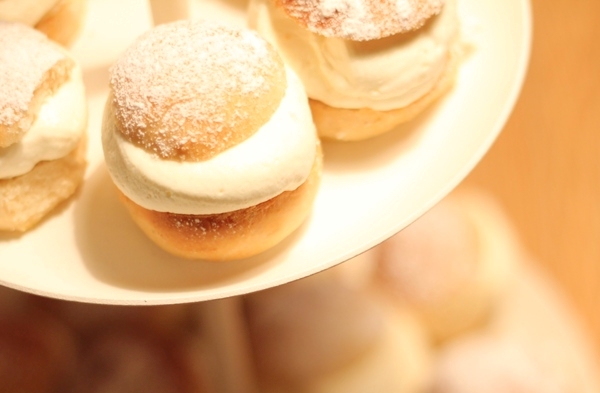 Fat Tuesday in Sweden mean one thing. We will all stuff our faces with the Swedish Semla. This wheat bun filled with almond paste and whipped cream make all Swedes eat like crazy. Find out everything you need to know about the Swedish Semla and how to make your own.

What is a Swedish Semla?

The Semla is a cardamom-spiced wheat bun with its top cut of and filled with almond paste and topped with whipped cream. The cut of top is then put back and sprinkled with powdered sugar. This time of year that is what you are most likely to eat if you are enjoying the world famous Swedish fika.

When do Swedes eat the Semla?

As mentioned the traditional day to eat the Semla is fat tuesday but they are available in bakeries from the beginning of the year and throughout the winter. Usually you’ll find the first ones around New Years. There are even some bakeries which serves the Semla all year round, which is, of course, frowned upon, especially by me. 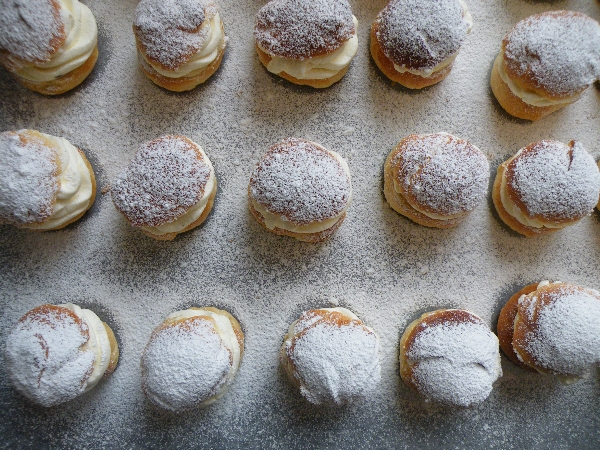 The History of the Swedish Semla

The tradition of the Semla is long and the history is a bit unclear. The word Semla is originally a loanword from the German word “semmel”. Semmel is in its turn believed to come from the latin word for wheat flour which is “simila”.

You’ll find different versions of the Semla not only in Sweden. There are versions in Finland, Norway, Denmark, Estonia, Iceland, Latvia, Lithuania and the Faroe Islands.

Now the semla is commonly eaten with coffee, milk or tea on its own. An older and traditional way to eat a semla is to serve in a bowl with warm milk. This is called “Hetvägg” and have no good English translation (It actually means Hot Wall, soo weird). But don’t worry, letting the bun soak up warm milk in a bowl is nothing but disgusting so all you really need to know about “Hetvägg” is that you should stay away. Really. The reason why this is such a bad idea is also that when this way of eating the semla the semla wasn’t the same as it is today. The bread was not as soft and fresh, so it needed something to soak in to make it good. Like mentioned, putting a fresh, soft cardamom bun into hot milk today is a bad idea.

Most Swedes like to stick to the traditional semla with just the bun, almond paste, and cream. But the last few years stores and bakeries have come up with plenty of new recipes and varieties of the semla. With social media helping out the one bakery who comes up with a new idea that becomes viral is sort of the winner, at least for that season. Here are just a few varieties that have been available in Sweden in recent years.

To me the good old fashioned way is the best way. The only variation I allow myself is to make them really small. But that’s only so I can eat more. Who doesn’t want that?

All right, those were some facts about the Swedish Semla. Now let’s find out how to make it. This recipe is for miniature Semlor and will give you about 40 semlor. You’ll probably eat around three to four for each person.

This is my favorite version of the Swedish semla. I make them small because I just like them more like that. Semlor doesn’t keep very well, a few hours then the bread start to get dry and the whipped cream doesn’t feel as fresh anymore. What I do is bake the buns, prepare the filling and then invite friends and family. Once they arrive you can easily whip some cream and put the semlor together.

Melt the butter and combine with the milk, yeast, sugar, and cardamom. Add the flour a little bit at the time and knead the dough until it is smooth and shiny. Leave to rise for about one hour.

Cut the dough into about forty pieces and shape into round buns, if you’re unsure of how big they should be you can weigh them. Mine was around 20 g each. Leave the buns to rise again for about 40 minutes.

Whisk the egg and brush the tops of the buns and the bake in the oven at 200°C for around ten minutes. Remove and leave to cool under a kitchen towel. The reason for the towel is so that the buns will stay soft. Let them cool completely before you fill them, too warm and they will melt the cream.

Using a mixer combine the almond paste with the small amount of cream, you want it to have a spreadable texture. Whip the other cream with the vanilla and powdered sugar until its thick.

Cut the top of the buns and spread the almond mixture on top, add the cream and then put the lid back on top. Using a sieve sprinkle powdered sugar on top. Then invite your friends over for some Swedish fat tuesday fika. 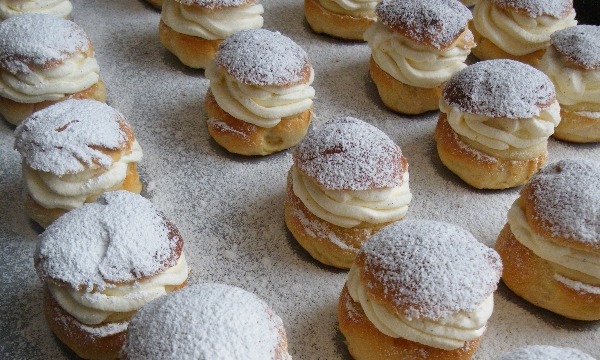 » Recipes » Swedish Semla – Everything You Need...