The blood orange is one of my favourite fruits, not only is it delicious on its own and beautiful. It’s great to use for food and drinks as well. But what is a blood orange and what makes it special? Let’s learn all you need to know about the blood orange, including how to use it.

So let’s talk about the blood orange. One of my favourite citrus fruits and fruits in general actually. What makes the blood orange a little bit different from many others is that I often use it in more savoury than sweet dishes. Lately, I’ve been using it for drinks as well which turned out really great. But let’s take this from the start, what is a blood orange and what makes it special. I’m starting with the facts and by the end of this article, I have a few recipes that you can try when cooking with this great citrus. 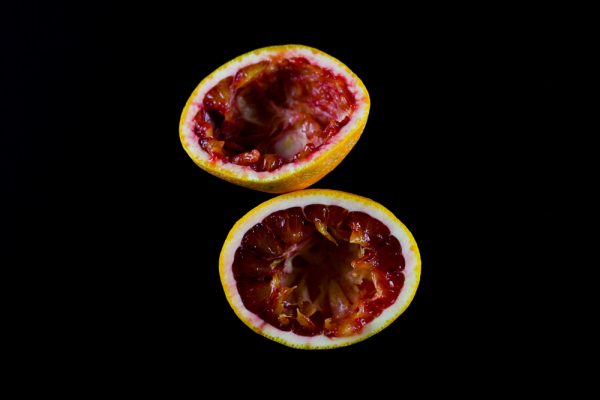 What is a blood orange

The blood orange is an orange variety. The flesh is a mix of deep dark red and orange, if squeezed you’ll get a red to bright red juice. It is the colour of the flesh that has given the fruit its name. Sometimes you can also see tones or spots or the red colour on the skin as well.

The fruit is often smaller than regular oranges with a fairly thin skin which can be quite difficult to peel by hand.

Blood orange is a mutation of the regular orange. The orange is a hybrid in itself from the start. Most likely between the pomelo and tangerine. Citrus fruits, in general, are a big world of hybrids, crossings and mutations so it’s not always easy to be more specific about origin than this.

What makes it red?

The blood orange is red and the thing that makes this happen is the presence of Anthocyanins which is an Antioxidant pigment. It’s is common in other types of flowers and fruit but not in citrus fruits. The flesh of the oranges develops the colour if the orange is grown in partly cold weather. Preferably any place that has enough warmth during the day but gets colder at night.

The red pigment from the antioxidant starts to accumulate in the vesicles of the fruit and continues to darken during cold storage.

Most antioxidants are considered healthy and can possibly help prevent cancer, so if the great flavour is not enough that’s another reason to eat more blood oranges. 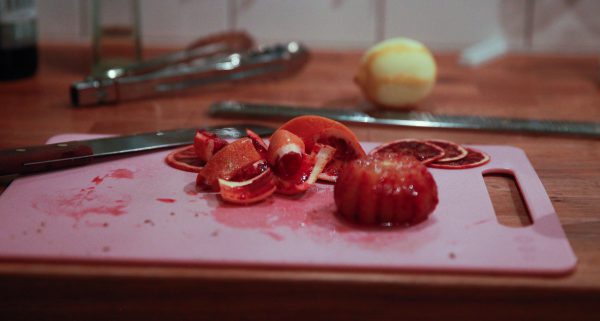 Where does it grow?

The most common types come from Italy and Spain and especially Sicily in Italy is considered the home of the blood orange. When it comes to growing the only thing stopping growing is the climate. So they can be grown anywhere as long as you get those cold nights. Commercial blood oranges are commonly grown in Sicily and other parts of Italy, California and Texas in the US and in Spain. I’m sure there are plenty of other places perfectly suited for growing beside these. You won’t find blood oranges in Florida thanks to its tropic nights. The oranges can still be grown but won’t develop the red colour.

There are three varieties of blood orange that is the most common. The Moro, the Sanguinello and the Tarocco. The Sanguinello comes from Spain, the Tarocco from Italy. These are the types you are most likely to find in stores, either fresh or in juice form.

There are other types which aren’t as common as the Washington Sanguine, Ruby Blood, Sanguina Doble Fina, Red Valencia, Khanpur and Vaccaro to name a few. 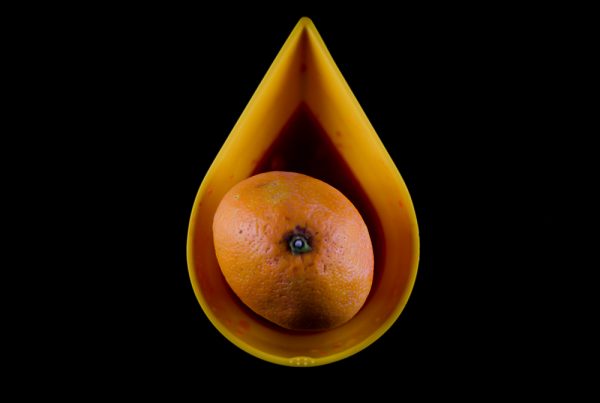 Like all citrus fruits the blood orange is a great source of vitamin C. Since they are packed with antioxidants there are claims that they can slow or prevent the growth of cancer cells. I’m not knowledgeable enough about this to know how much truth that is in that but I think its safe to say that they are not bad for you.

Besides those benefits, they are also high in potassium, calcium and if you eat it without juicing it you’ll even get some fibre. So do eat these when in season.

The flavour of blood oranges

Now for the important stuff. The flavour of blood oranges is different than regular, it has more aroma and some claim it has notes of raspberries. To me, they are a little bit like sweet grapefruit with lots of orange flavours and I guess the sweeter tones can remind a little bit of raspberries. They are also slightly bitter which I personally love. Now let’s see how you can use them in food and drinks, shall we? 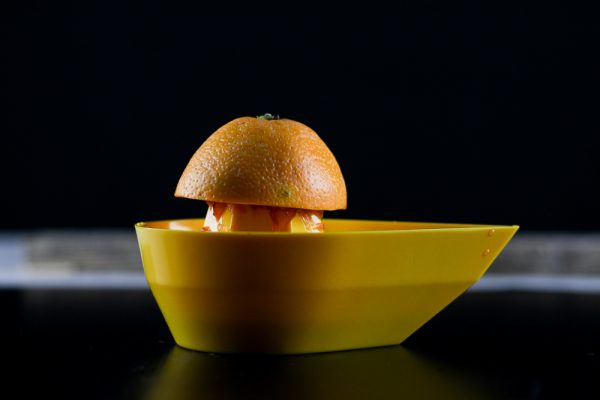 How to cook with blood oranges

These recipes have been published here at Ateriet before. I’m just posting the recipes here, if you want more details about each one there is a link in each title. Enjoy and good luck cooking with this great fruit. 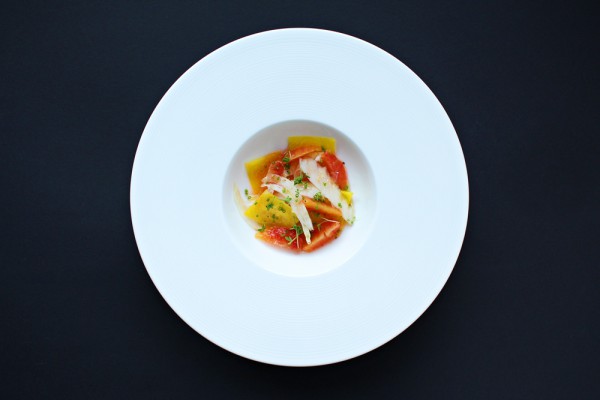 Wash the fennel and the shave thin slices of it using a potato peeler. If you are preparing this dish ahead of time you can put the fennel in some cold water with a little bit of lemon juice to keep it crunchy. It will lose a bit of its flavour so the best thing is to do it just before serving.

Peel the beets and wash them then slice thin slices with the potato peeler. Combine the orange wedges, fennel and beets and add a little bit of cress and sliced chives. Season with salt and pepper.

Add olive oil, salt and pepper to the orange juice and add a little bit of vinaigrette to the salad. Serve. 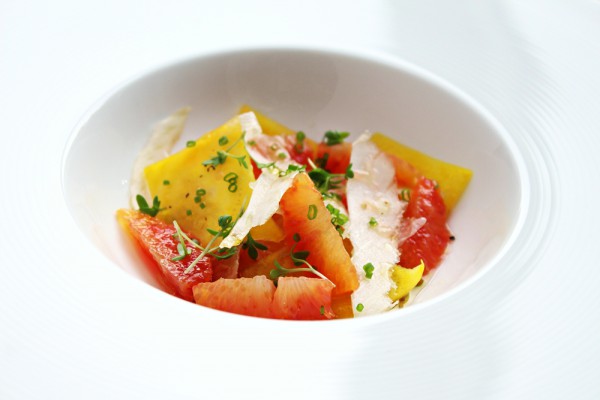 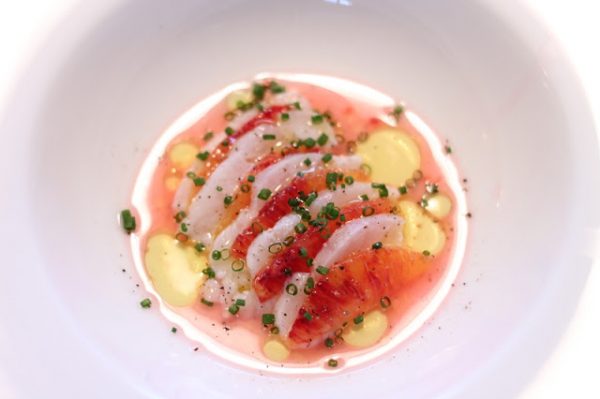 Slice the cod into thin slices and season with salt and fresh lime juice, let sit in the fridge for twenty minutes. Cut out filés of the oranges, arrange slices of cod with orange as in the photos.

Squeeze some of the blood orange juice on top, slice the chives and add on the fish. Finally season with olive oil, salt and freshly ground pepper. 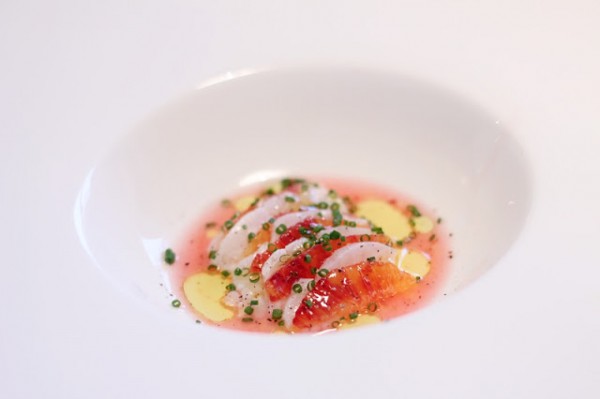 Radicchio and Blood Orange Side Salad with Fennel Vinaigrette

serves 4 as a small side salad 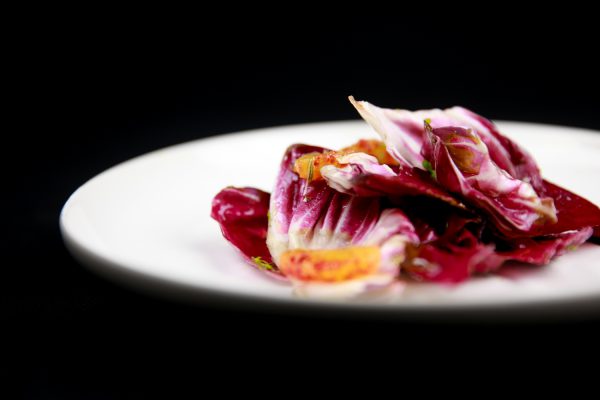 First, pull the leaves from the head of radicchio salad so you’ve got them all pulled apart. If they are big you can split them in half as well. Rinse in water and then shake off the water so they are as dry as possible.

Peel the blood oranges with a knife and then cut out the individual filets of orange flesh. There will be loads of juice dropping off when you do this so stand with a bowl underneath so the juice is collected. You will you that juice for the vinaigrette later.

The fennel dill is picked from a fresh bulb of fennel. If you don’t have any you can exclude it from the recipe.

Take the blood orange juice and measure it so you have about two tablespoons. Add olive oil. Crush the fennel seeds and add, season with salt and pepper.

Heat a frying pan and add the olive oil. Then add the radicchio and toss in the hot olive oil in the pan for about 30 seconds. Remove from the heat and add the radicchio to a bowl. Add the blood orange filets, fennel dill and the vinaigrette. Toss and season with salt and pepper if necessary. Serve immediately. 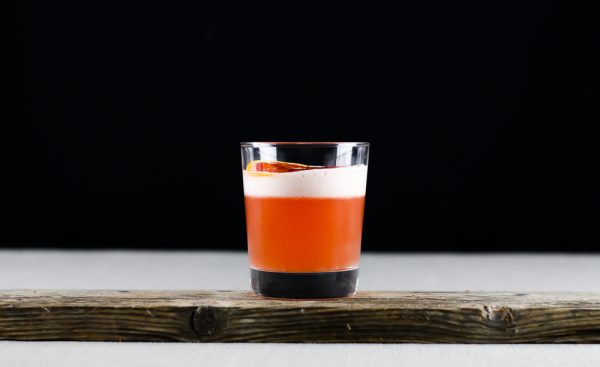 First, make the simple syrup if you don’t already have some. Just combine one part sugar with one part water and bring to a boil. Then leave to cool.

Squeeze blood oranges and lemons for the juice, if you’re only making one then one or maybe two of each should be plenty. Then strain the juice through a sieve.

Add bourbon, blood orange juice, lemon juice, simple syrup, egg white and blood orange bitters to the shaker. Add a handful of ice and then shake hard for about 30 seconds. Strain the drink into the glass, make sure to let all the foam drip into the glass. Cut a thin slice of blood orange and place on top of the foam. Serve!

The one thing that might be hard to find for this recipe is the blood orange bitters. If you don’t have it you can add a shaker or two or any orange bitter, don’t have that either? Then just skip it. It will not be exactly the same but it will still be a great drink. Hope you like it as much as me. Good luck!